In spite of the city and neighbors continuing to battle an appeal at the State level for the earlier zoning decisions at the city, the Peterkorts are apparently moving forward with development plans. They held a requisite neighborhood meeting on 4/25/2013 to share with the community the plan for traffic circulation. A copy of the plan is provided below. 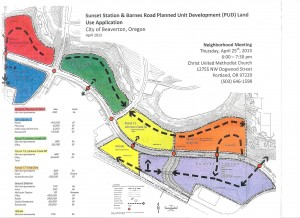 Responding to questions, Peterkort representative, Scott Eaton hinted that the midrise apartments would mostly likely be 4 stories and 100 x 200ft in size. He also predicted that the Parcel 1-Petercourt West and Town square 2 parcels would be mostly likely to develop first, however the Petercourt West parcel contained significant topographical challenges.

He also stated that to get the higher rent demanded by the Peterkort family (owners), there are significant challenges to making the Sunset Station parcel a significant draw that will pull people in willing to pay a higher rent than other area apartments. He mentioned a theater and quality restaurant in particular (there was also mention of a gas station, but I don’t recall the implied location). He indicated they hope to firm up 3 anchor commercial business in the next 6-12 mos. Several attendees expressed concern about how the people living north of Barnes and at the bottom of the hill would be expected to traverse on foot up to those facilities. A foot/bike bridge was suggested which the speaker dismissed handily. His only response was that there would be light-protected crosswalks.

A representative of Tualatin Hills Park and Rec District (THPRD) was in attendance. He requested that the Peterkorts contact them to discuss how the estimated $10 million in development fees they would be responsible for might be used for park space within this development, rather than missing the opportunity.

No single family owner-occupied residences are expected to be built on any of these properties.

The speaker indicated that there were no protected or old-growth trees on any of the sites and that the neighborhood should understand that they are all subject to likely removal.

Note that the diagram presented at this meeting contained at least one important difference than what’s shown above. There’s a dashed line showing traffic circulation along the stream on the North edge in the Orange “Holly Site” (containing midrise apartments and convenience stores). The arrow had been removed from that line and the speaker indicated that they had received feedback from individuals concerned about a connection to the existing neighborhood to the East of that arrow. This would connect with a county road right-of-way connecting to Brookside in the Westhaven/Mitchell Park Leahy neighborhood. He indicated it would be up to the city and county to duke out whether or not that would be a connection but hinted it would mostly likely be a road with a locked gate.